The former North Richmond Police Station and Residence is located at 39 Bells Line of Road, North Richmond, New South Wales. The building was constructed in 1911 replacing the former temporary office which operated out of premises rented from George Matcham Pitt of Sunnyside, North Richmond. The NSW Department of Public Works was responsible for the repairs and maintenance of the leased building.

Excerpt from the Windsor and Richmond Gazette 4 March 1899

Tenders for the erection of the new police station were published in the New South Wales Government Gazette on the 21 September 1910. The building included a front office, residence for the officer and family and lockup.

In October that year the tender price of £1414 was accepted from builder F Vernon. In January 1911, the Daily Telegraph newspaper reported that construction of the new station had commenced.

Apart from its obvious role in law enforcement, the police station also served the local community in other ways. The station was designated a polling place for local government elections and also acted as an office for Colo Shire Council where documents and specifications could be obtained for advertised tenders such as road works.

A telephone was installed at the station in 1924. Constable Allen was appointed as officer-in-charge of the station in October 1926 moving to the district from Parkes, NSW with his wife and family. In September 1933 the NSW Commissioner of police announced that smaller stations such as Wilberforce, North Richmond and Kurrajong would probably be closing due to the ’re-arrangement of duties’ in the district. 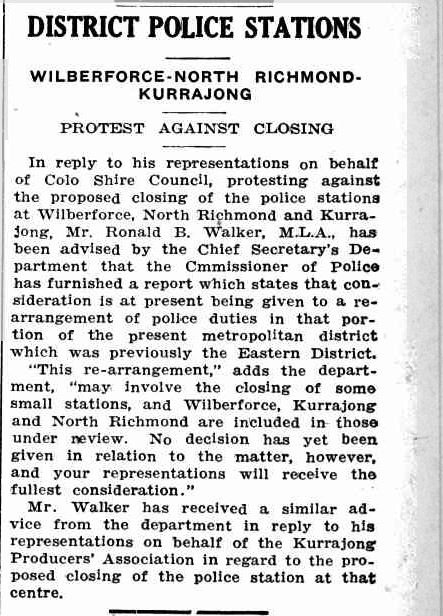 Excerpt from the Windsor and Richmond Gazette 15 September 1933

The station was closed but continued to be used as accommodation for police officers. The building continued to be maintained by NSW Public Works Department, for example, in 1934, the station, now refered to as North Richmond Police Quarters were repaired and improved. During 1935 and for the next five years the local community lobbied for the re-establishment of the station.

Representations were also made by local MLA Robert Bruce Walker, all to no avail and the department judged that the current arrangements of police officers being based in the station at Richmond were satisfactory. Repairs and painting of the building were carried out by NSW Public Works Department in 1938. The old police station continued in its role as accommodation for police officers until 1998.

The building is listed on the Hawkesbury Local Environmental Plan 2012 as an item of local significance.