An area of about 2 hectares, the park is located at the end of Stanley Avenue, Kurrajong Heights, New South Wales. The reserve for public recreation was instigated by the Kurrajong Heights Progress Association which provided volunteer labour for the project as well as donating £125 to Colo Shire Council towards construction costs in April 1952. The reserve was notified on 17 September 1954 and the name assigned under the Geographical Names Act (1966) in June 1982. Facilities in the reserve include tennis courts, children’s playground and public toilets.

In 1979, The Kurrajong Heights Garden Club unveiled a plaque honouring the life and work of Caroline Louisa Calvert nee Atkinson (1834-1872), a noted Australian naturalist, artist and author who resided at ‘Fernhurst’, Kurrajong Heights for many years. Over her short life, she produced a significant body of work including six novels and a regular column in the Sydney Morning Herald newspaper. She studied, drew and described in detail the flora and some of the fauna of the Lower Blue Mountains. Sadly, the memorial in the park is now neglected and vandalised. 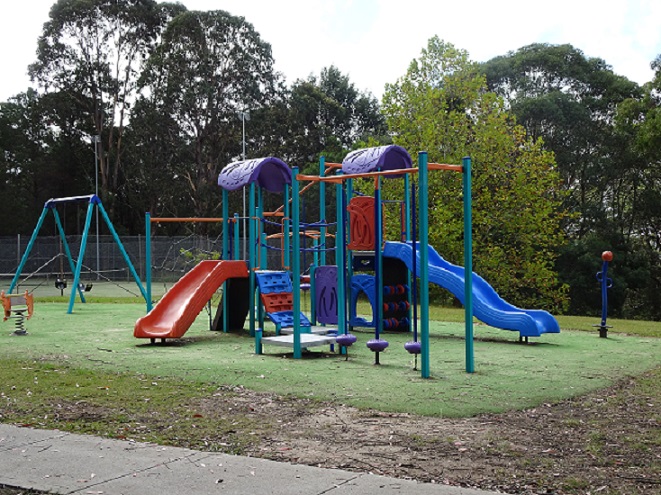 A reserve beside Bells Line of Road about 2 km SSE of Kurrajong Heights.

Mr. F. L. Diggins, Honorary Secretary of the Kurrajong Heights Progress Association advised Colo Shire Council that a survey of the new park in Kurrajong Heights had been completed and as soon as formalities had been completed by the NSW Department of Lands then the association would organise a number of working bees to carry out improvements to the park. The Shire President remarked that “These people are prepared to help themselves and we [Colo Shire Council] should help all we can”.