Upper Colo Public Hall was located on Upper Colo Road, Upper Colo, New South Wales across the road from the southern approach to the Upper Colo Bridge. The site, described as Portion 71, Parish of Colo, County of Cook amounting to just over one acre of land was gazetted on the 29 November 1935 for the construction of a public hall. 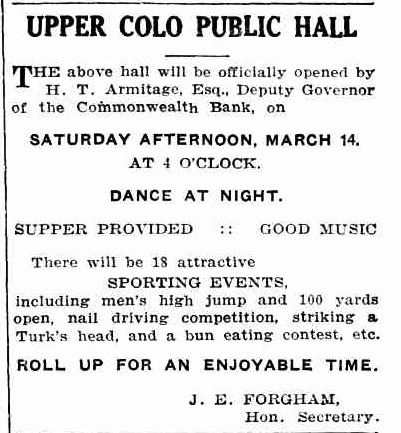 Advertisement from the Windsor and Richmond Gazette 6 March 1936, p. 11

The hall was officially opened on Saturday 14 March 1936 at 4.00pm by H. T. Armitage, Esq, Deputy Governor of the Commonwealth Bank. The Windsor and Richmond Gazette advertised the upcoming celebrations which included an afternoon of sports. Some of the acivitities included the men’s high jump and 100 yards race, nail driving competition and a bun eating contest. A dance with supper provided followed the sports in the evening.

The report following the opening commented that there was a good attendance at the celebration despite the rain and that " A very excellent supper was served and ice-cream, chocolates and soft drinks were obtainable. All the proceeds will go to the hall funds". The hall was well used by the community for meetings, parties, wedding receptions and dances until the 1970s. Unfortunately the hall was washed away in the tremenous flood of March 1978.