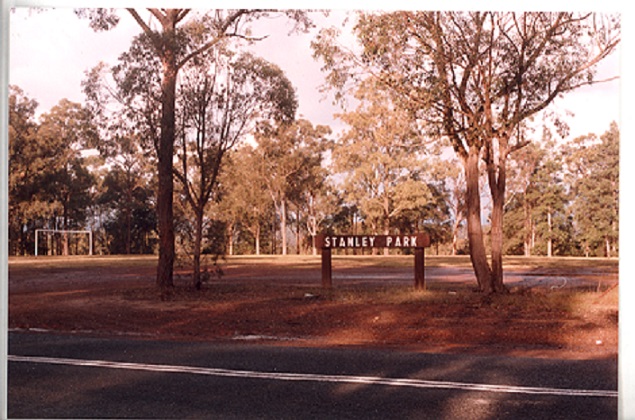 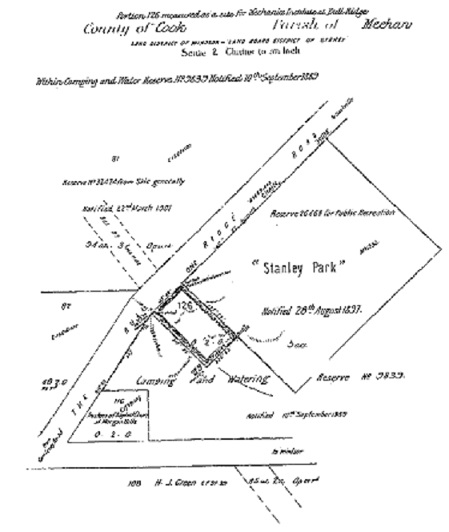 The Reserve No. 26468 for Public Recreation, was notified on the 28 August 1897, comprising 5 acres, it is situated on East Kurrajong Road, East Kurrajong, NSW. East Kurrajong was formerly known as Bullridge and for a short time as Morgan. The park was officially opened on 12 November 1900. Nearby, the celebration for the opening of the Baptist Church was also held. From that time the park has been the venue for numerous sports days and events in association with the Kurrajong East Public School, the East Kurrajong Fire Brigade and the East Kurrajong School of Arts as well as other local organisations.

Never has such a large crowd of persons assembled at the Bullridge (now officially known as Morgan), as on Monday last when the official openings of Stanley Park, and of the new Baptist Church took place. Early in the forenoon people began to assemble and before midday there must have been 500 persons in the vicinity. The two functions were held within coo-ee of each other, and many of the visitors attended both. The Stanley Park celebrations had been well worked up by Mr. William Moses, J.P., the principal mover in the matter, and Mr. H. L. Archer, the hon secretary.

Splendid weather prevailed, although rather warm, and everyone appeared to enjoy themselves thoroughly. Stanley Park is situated on a nice altitude and commands an extensive view of the surrounding neighbourhood. Flags and bunting had been posted on all sides and to the entrance of the Park extra attention had been given. An arch of bushes had been formed, over which a large banner bearing the name of ‘Stanley Park, Bullridge’ waved in the breeze, and altogether the surroundings were quite picturesque. A large refreshment booth covered with green bushes, had been erected by the committee, and here the ‘inner man’ could be supplied with wholesome viands at any hour of the day.

Among the ladies who were responsible for the arranging of the tables, and who had charge of them, were Mesdames Alcorn, Izzard, Leggatt, Packer, Green, Cox, H. Green, Misses Hulbert, Izzard, Buttsworth, Green and others. They were most attentive to the wants of those present, and are deserving of the thanks of all. At about 12.30 a buggy was improvised as a platform, and Mr. Moses, J.P., as chairman of the trustees of the Park, rose amid cheers, to introduce the Hon. W. Walker, M.L.C. In doing so he said they had gathered together that day to celebrate the opening of Stanley Park, and he was very pleased to see so many present. The Hon. W. Walker, had kindly promised to open Stanley Park. Mr. Walker was one of the oldest residents of the district, a man who had represented the Hawkesbury in the Parliament of the country, and who now held an honorable position as a member of the Legislative Council, besides many of the leading positions in the district. Mr. Walker, he believed, was over 70 years of age, and was as well-known as old St. Matthew’s Church at Windsor. Despite his advanced years, and the many invitations he (Mr. Walker) had received to go elsewhere, he had preferred to come to the Bullridge and open Stanley Park. (Cheers).

The Hon. W. Walker, M.L.C, then came forward amidst great cheering. He said he had much pleasure in being present on that interesting occasion and in taking part in the proceedings of the day. Although he had lived in Windsor nearly all his life, he had never before visited that locality, and he was delighted with what he had seen, and to meet so many contented and well-to-do people of the district He had been invited by Mr Moses and the Trustees of the Park on which they were assembled to publicly declare it open, and after due consideration he consented to comply with the request. Before deciding to do so, however, he had looked well into the position of affairs to see that they were on solid ground. He found that in the Government Gazette of the 3rd of January last the following notice appeared: — Appointment of Trustees: Reserve No. 26468 at Bull Ridge, County of Cook, Parish of Meehan, area 5 acres; notified 28th August, 1897, for public recreation, and known as Stanley Park — Messrs William Moses, Daniel Sydney Packer, Henry Lee Archer, Alfred Alcorn, Thomas Case. Signed, T H Hassall, Secretary for Lands.

These were the gentlemen who had brought him there, and he congratulated the people of the district on their acquirement of so spacious and nice a piece of land for the purpose intended, where they could enjoy themselves at cricket and athletic sports and in other ways, as occasion required. He regretted to find that there had been some disagreement as to the naming of the locality, In his opinion it was not advisable to name any place after any particular individual, unless where a park, for instance, had been given by a gentleman from his own land or at his own expense, when it might be called after him; but when the Government granted the land the name given should only be such as had the approval of a majority of the people of the district for whose use it was intended. He had seen unseemly disturbances caused by these misplaced names, and notably at Windsor, where the Windsor Park was called by a name of a person who was anything but popular. In the present instance he understood that the name given to the park carried general approval, and only a few objected to it. He now had much pleasure in declaring Stanley Park, Bull Ridge, publicly opened. (Loud Cheers).

He could not conclude without saying they were much indebted to his friend Mr Moses for the interest he had taken in the matter. He had a splendid property near, and had spent a great deal of money amongst them improving it. (Applause). Mr H L Archer proposed a vote of thanks to the Hon W Walker, which was seconded by Mr H Packman and carried amidst hearty cheers. Mr Brinsley Hall, J.P., being called upon, expressed pleasure at being present and hoped they would all enjoy themselves thoroughly. The Hon W Walker then called for three cheers for the Queen, which were royally given by the large assemblage.

Cheers were also given for Mr and Mrs Moses, and ‘Our boys in South Africa’ This concluded the opening ceremony, and an adjournment was then made for lunch. Keen appetites were soon appeased by the substantial repast provided. During the afternoon a cricket match between the Bullridge and Wilberforce teams was played on Stanley Park and resulted in a win for Wilberforce on the first innings. Late in the afternoon the Hon W Walker, Mr Brinsley Hall, and others were driven over ‘Oakville’ estate the property of Mr Moses, and were entertained at afternoon tea, the visitors being charmed with the beautiful spot Mr Moses has made there.

In the evening an open air magic lantern entertainment was given by Mr Simpson, of Freeman’s Reach, which was greatly appreciated. Some excellent pictures were shown including views of district scenery, and a photo of Mr Moses At the conclusion of the entertainment Mr Moses called for three cheers for Mr Simpson, which were heartily given, as were also cheers for the ladies and gentlemen who had worked so hard to make the affair a success ‘Three cheers for Mr Moses’ was then called by someone in the crowd and once more the air rang with hearty hurrahs. During the afternoon the Hon W Walker and party paid a visit to the opening function of the Baptist Church and were there entertained. 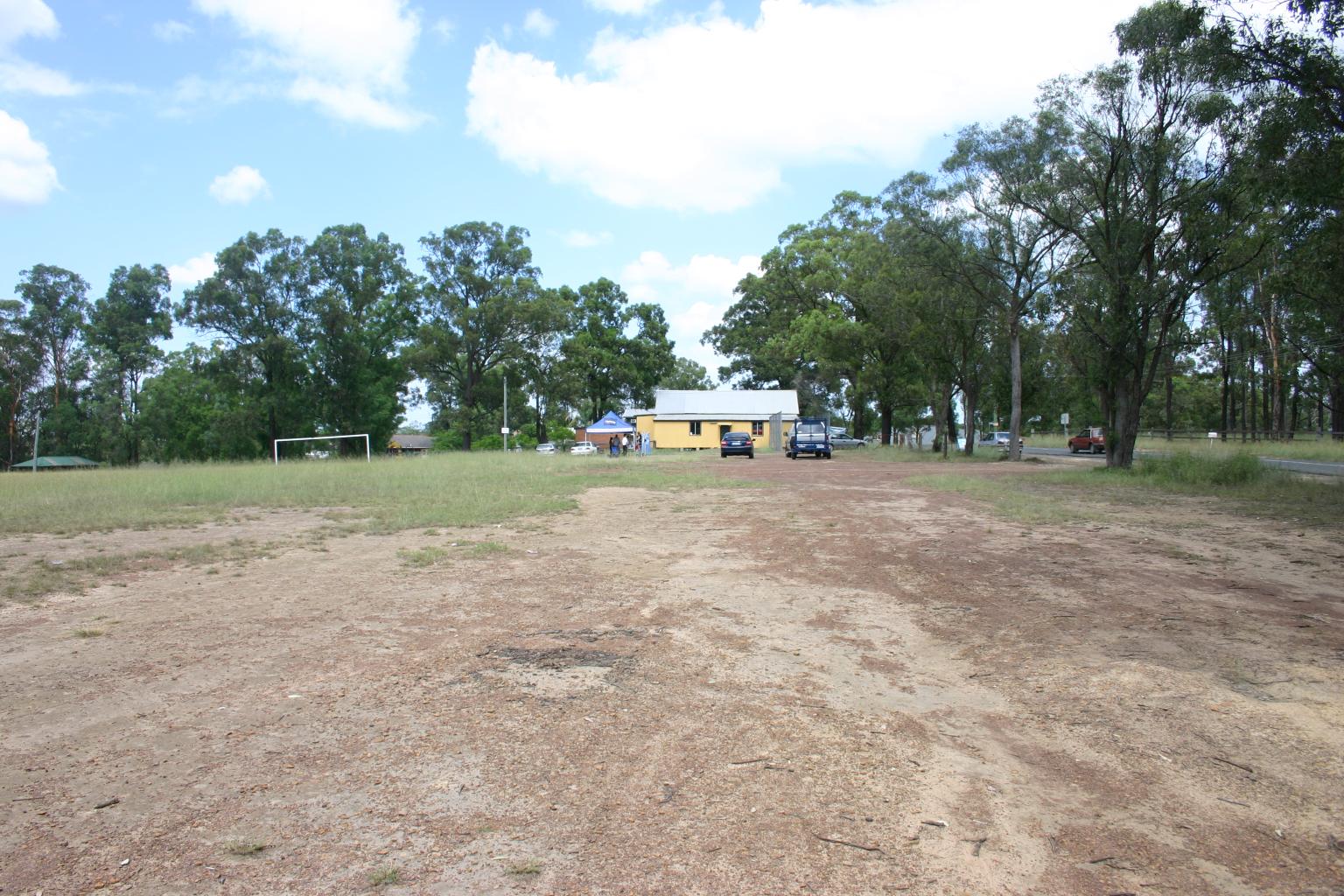