Warwick’s Lagoon is a perennial body of water located on Richmond Lowlands, New South Wales between Ridges Lane and Triangle Lane which flows into a chain of smaller lagoond before opening onto the Hawkesbury River. The area below the town of Richmond and along the river bank was once known as the Richmond Bottoms and is now called Richmond Lowlands or just the Lowlands. The several lagoons situated in the area grow and shrink depending on rainfall and are greatly enlarged by floodwater which remained after the river receded.

The lagoon is located on land amounting to 200 acres described as Portion 25 Parish of Ham Common, County of Cumberland granted to James Kirby and known as Kirby Farm in 1799. The lagoon is named for James Warwick and family who farmed the area during the 1850s.

Albert Arthur Price purchased 30 acres of land which had a frontage to the lagoon from the estate of the late Joseph Edward Onus Price in November 1911. He made an application for a Water License to pump from Warwicks Lagoon in January 1913. Over the years much of the river flats was leased to small farmers including members of the Hough family. 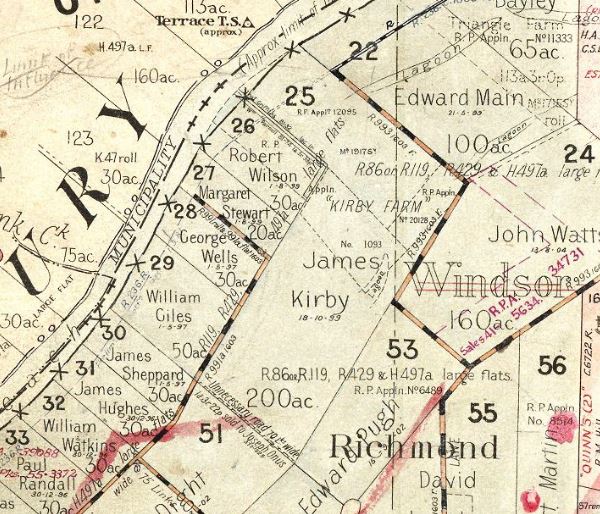 Excerpt from Parish of Ham Common, County of Cumberland map showing the riverbank location of James Kirby’s grant of 1799